Taijiquan, known as Taiji (Tai Ji), was originally created as a martial art. There are many different styles of Taiji. Among them, Yang, Chen, Sun and Wu style are the most popular. 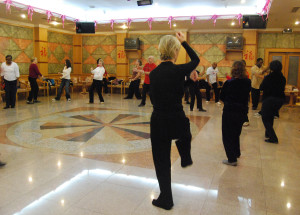 However, all of them utilize the Yin-Yang philosophy; use eight kinds of force and five steps. The way it is performed is slow, soft and graceful with smooth and even transitions between movements, each movement of Taiji contains martial applications. Since it is performed slowly and softly, how is that possible for Taiji to be a form of martial art? Well, the secret lies in the training method. It involves two kinds of training. One is Taiji Qigong (either standing or sitting) practice, and the other is the form (routine) practice.

The Taiji Qigong practice builds up the internal power, and the form practice executes the techniques. At the very beginning, the trainee needs to start slow and gentle. It is just like watching the movement in slow motion. This allows the trainee has time to analyze the body mechanic and feel the details of each movement. Once the initiate training is finished, the trainee will progress to actual martial art application—push hands, two-men set etc.

The benefits of practicing 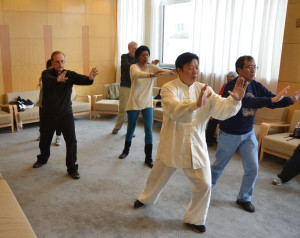 Taiji, especially for older adults, are documented in numerous studies since early 90s. Steven L. Wolf, Ph.D., Tingsen Xu, Ph.D. and colleagues at the Emory University School of Medicine, Atlanta, GA, had published more than ten papers on Taiji and balance. One of their early studies sponsored by the National Institute on Aging (NIA) was published in the Journal of the American Geriatrics Society’s May 1996 issue. The study found that older people taking part in a 15-week Taiji program reduced their risk of falling by 47.5 percent. (One of Dr. Wolf’s articles on Taiji is: The influence of intense Tai Chi training on functional performance and homodynamic outcomes in transitionally frail, older adults. J Gerontol Med Sci., 61A, 184-89, 2006. No wonder Time Magazine called Taiji the Perfect Exercise (Why Tai Chi Is the Perfect Exercise, By: Christine Gorman, Time magazine, July 31, 2002). How can Taiji achieve that? As in all forms of martial art, Taiji focuses on the precise execution of the movements and it requires a calm mind and relaxed body. To do them correctly require concentration, balance, alignment, eye-hand coordination, and so on. Thus Taiji practice can correct poor body postural, improve balance, motor control etc. Also, Taiji works on the Meridian system that improves the Qi flow and strengthen health. 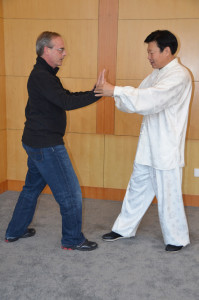 Traditionally, it takes years of studying and intensive practicing to master the proper martial art techniques. Today majority of people practice it for health, it does not take that long to see the results.