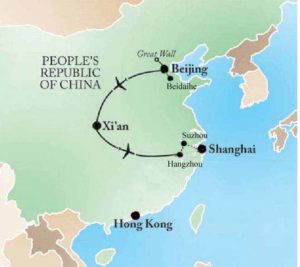 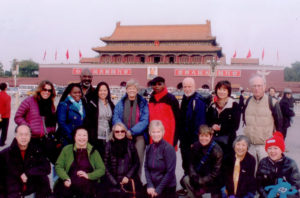 Nonstop flight from LAX/San Francisco to Beijing. Arrive in Beijing in the late afternoon on Fri, Oct 12. If our flight is on time, we will travel by motor coach in the evening to Beidaihe to begin our study.

Study Taiji Qigong. Instructor: Feng Jiming Lao-shi, a student of the late legendarily Grandmaster Li Jingwu, has studied and practiced Traditional Chinese Medicine for over 30 years in the areas of acupuncture, Tui Na, and moxibustion. He specializes in the diseases of the neck, shoulder, waist, hip joint, and feet as well as post-stroke syndromes. He is the on-call Tui Na physician for Chinese government officials vacationing in the seaside resort town of Beidaihe. Feng Lao-shi has taught qigong and acupuncture in Indonesia and Eroupe. In addition to teaching and clinical work, Feng Lao-shi is the Chairman of the Department of Acupuncture and Tui Na, as well as the Chief Instructor of Tai Chi Studies at the National Medical Qigong Beidaihe Education Center.

We will visit the beginning of the Great Wall --  “the Old Dragon Head.”

After breakfast, we will travel by motor coach back to Beijing. The evening is at your leisure to explore Beijing.

In the morning, we will tour Tian’anmen Square, the largest public square in the world, capable of holding more than one million people. An assortment of historical buildings, including Chairman Mao’s Mausoleum, the Monument to the People’s Heroes, and the Great Hall of the People – home of the National People’s Congress, flank the Square. Walk through the Gate of Heavenly Peace to enter the Forbidden City, a 9,999-room compound, where the 24 emperors of the Ming and the Qing Dynasties ruled the Middle Kingdom for nearly 500 years (1420-1911). Experience the architectural splendor of the palaces, ceremonial courtyards and private quarters. After lunch, we will tour the Summer Palace, built in classical Chinese style in 1750 as a royal recreational resort. Among its famous features is the 700-meter-long corridor with its wonderful Painted Gallery, the Marble Barge, and several magnificently painted pavilions and pagodas.

The highlight today is an excursion to the Great Wall. Enjoy the dramatic vistas and marvel at the Wall as it climbs and descends steep ridges and narrow valleys. The Great Wall stretches an impossible 4000 miles across China's north, covering nine provinces—from the Yellow Sea to the Gobi Desert. An enormous undertaking that originated under Qin Shi Huang (first emperor of China) in 200 B.C., the Great Wall was not completed until the Ming Dynasty in 1640. Afterwards, we will visit the Ming Tombs, resting place to 13 emperors of the Ming Dynasty; and walk the path of the nearby Sacred Way.

In the morning, we will visit the Temple of Heaven. This remarkable building is considered the supreme achievement of traditional Chinese architecture. The most striking edifice is the “Hall of Prayer of Good Harvests”, which according to the emperor’s Fengshui masters, is the exact point where heaven and Earth met. Built in 1420, this masterpiece of Ming architecture, features triple eaves, dramatically carved marble balustrades, and gorgeous glazed azure roof that symbolizes the color of heaven. Built without a single nails, this 120-foot-high structure is fixed by four inner pillars represent the seasons, and two sets of 12 columns denote the months and the traditional Chinese division of a day.  During each winter solstice, the Ming and Qing emperors would perform rites and make sacrifices to Heaven praying for a bountiful harvest. After lunch, we will take an afternoon flight to Xian.

We will visit the site of one of the century’s greatest archeological discoveries - the Terra Cotta Soldiers. Marvel at the legion of TERRACOTTA WARRIORS that has been guarding the burial site of China’s first emperor, Qin Shi Huangdi, for 2,000 years. We will fly to Hangzhou in the late afternoon.

An old Chinese saying states, “In heaven above there is Paradise, on earth there is Suzhou and Hangzhou”. Hangzhou has been the inspiration for poets and artists for centuries. We will tour the 1,700-year-old Lingyin Temple, one of China’s most famous monasteries. Originally constructed in 326 AD, the present structures reflect their restoration during the Qing Dynasty. The temple once housed up to 3,000 monks within its 18 pavilions and 75 temple halls. Another sacred site is The Peak That Flew from Afar, so aptly named because it resembles a Holy Mountain in India that was thought to have been transported to this spot. Tour this site and note that the 380 Buddhist sculptures and inscriptions were carved more than 700 years ago. After lunch, we will take a cruise on the picturesque West Lake, which is said to be created from a pearl dropped by a phoenix and a dragon, and proclaimed by the Chinese "the landscape composed by a painter". Stroll along the lake’s causeways and immerse yourself in its beauty. No tour to Hangzhou is complete without going to the world renowned Dragon Well Tea Plantation, where the legendary Longjing green tea is picked and processed by hand. The first picked tea leaves of the new harvest were once reserved solely for the Emperor and transported to him via the Grand Canal. You will learn about the harvesting, as well as the proper way to brew this healthful beverage. The Chinese Tea Ceremony will be demonstrated. Sample the freshness of the tea. Appreciate its “green color, smooth appearance, fragrant aroma and sweet taste”.  After dinner, we will travel to Suzhou, one of China’s premier tourist destinations.

In China, Suzhou is often referred as the “Venice of the East”. It is a 2,500-year-old city famous for its traditional gardens, ancient canals and silk production. In 1997 Suzhou was designated an UNESCO World Heritage Site. The construction of the Grand Canal created a means whereby goods from this region could be transported to the Northern capital, Beijing, a distance of over 600 miles. With prosperity came prestige as merchants and artisans plied their trade. Elaborate gardens were built. We will visit the Humble Administrator's Garden and The Suzhou Museum tour the Silk Spinning Mill, where you will learn how silk is created from the mulberry-munching silkworms to produce thread and fine cloth. After lunch, we will visit Tiger Hill and take a cruise on the Grand Canal and see local people’s life along the river. After dinner, we will travel by motor coach to Shanghai.

Shanghai is China’s dynamic financial and artistic center. In the morning, we will take a walk along the Bund, the elegant riverside promenade which symbolized European and foreign influence and affluence in the 1930s. See the ships and barges on the Huangpu River, en route to the sea or going upstream to the interior of China. The modernistic Oriental Pearl TV tower looms in the background redefining the skyline. Later, we will visit the Shanghai Museum and the Old Shanghai bazaar. After lunch, it is free afternoon to shop at the Old Shanghai bazaar or to explore this vibrant city on your own.

After breakfast, we will travel to airport and fly back home.

* Tour Fare includes land transportation, meals (with some exceptions on international arrival and departure days and as noted on the itinerary), instructional fees (for study Tour), hotels, tour guides, and all of the attractions listed on the itinerary but does NOT include the Visa (entrance permit) for China, all personal expenses such as excess baggage, travel/ medical insurance, passport, laundry, telephone, internet, etc.

**Participation in this tour requires purchase of the following flights as a group: Beijing/Xian; Xian/Hangzhou.  *** For individuals whom prefer arranging their own flights to China will have to arrange their own airport transfers to Beidaihe.

A Deposit of $500 per person is due with registration. Registration deadline and final balance of fee due date is August 15, 2018. The tour price is not guaranteed until we receive the deposit. After August 15, 2018, please call for availability. In order to keep the tour fee affordable, we do not accept credit cards.

Deposits are refundable (less a $50 administrative fee) if requested by August 15, 2018

Air tickets are non-refundable. There is no refund for cancellation within 14 days prior to departure, no-show, or early return.

In the unlikely event of tours cancellation by Chilel™ Qigong, deposit & fee balance will be fully refunded