After helping Grandmaster Gue Lin establish the theoretical aspect of the Xīn Qigong, Dr. Pang Ming began to reform Traditional Qigong in the 1980s. With innovative applications to Qigong, he created his own system and called it Zhineng Qigong; Zhineng means 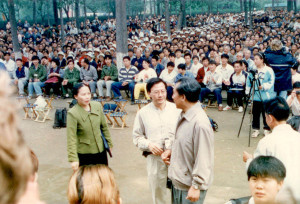 The Hún Yuán Holistic Theory is the theoretical foundation of the Chilel Qigong system.  The Hún Yuán Holistic Theory states that the physical body, Qi, and mind of the human body are the manifestation or the different appearances of Qi. Qi can concentrate to become a physical body. It also can change into mind activities. Qi nourishes both physical body and mind. It exists in every part of the Universe and permeates every level of matter. It is the energy source and the raw material for transmutations between different types of matter.

2.     Chilel Qigong has a complete system of methods.

Both the Second and the Third Step Gong belong to the Internal stage. 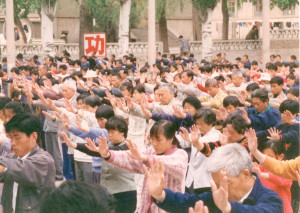 The Fourth, Fifth and Sixth Step Gongs belong to the Central stage. The first step Gong, Lift Qi Up and Pour Qi Down Method, is to cultivate the External Qi. Its purpose is to strengthen these innate functions and to ensure the venues for exchanging Qi with nature will remain open and uninterrupted. This will transmute the Qi in the skin and the membrane and the Qi in nature into one. This process mainly uses the mind intent and occurs mainly outside of the body; therefore, it is called External stage. The Internal stage includes the second step Gong, The Body and Mind Method, and the third step Gong—The Five Elements Method.  The Body and Mind Method stretches the tendons and loosens up the joints, ligaments, and bones. It focuses on the integration of the physical body and mental activities. Its purpose is to merge the Meridians’ Qi and the blood into one by opening the venues between the five layers of the physical body (skin, muscles, tendons, blood vessels, and skeleton).  This will strengthen the body functions, and become healthier. The Five Elements Method cultivates Qi in the heart, liver, spleen, lungs, and kidneys. Practicing The Five Elements Method will make the Inner Organ Qi sufficient, strengthen the organs’ functions, and regulate the emotions and mental activities associated with the inner organs. It also strengthens one’s ability to circulate Qi both inside and outside of the body. Since Fourth, Fifth, and Sixth Step Gongs, Stillness Forms, and Spontaneous Forms have not been taught by Dr. Páng to general public, their introduction will be omitted from here.]

Chilel Qigong methods were a collection of many special techniques from Confucian, Taoist, Buddhist, Medical, Martial Art, and Folk Qigongs. They were organized into one system. Chilel Qigong contains many techniques that are simple and important. These techniques are from his teachers which took them decades to refine, and were not easily taught to outsiders. These techniques may not be the essence of the methods, but they are the keys and the shortcuts to the practice.

In Chilel Qigong, teaching through intuitive transmission is mainly done by Organizing the Qi Field. “Organizing the Qi Field” refers to the teacher using his/her mind intent to gather and mobilize the natural Qi and the Qi of every participant, and to unite and transform them into one “Field.” When the teacher is visualizing the movements during teaching, then everyone can perform the movements better. The teacher is like a huge magnet and the students are like metal. Forming a Qi Field is like putting the magnet and metal together— the students will get “magnetized.”

5.     Chilel Qigong does not use special consciousness activities.

The way that Chilel Qigong uses the mind activities is that it does not pursue emptiness and tranquility, and does not use specific mind/consciousness activities. Chilel Qigong primarily requires the practitioner to focus consciously on the execution of the movements,   and to follow the movements’ requirement to focus the mind intent on each of the relevant areas during the practice. Besides this, there are no specific mind activities. 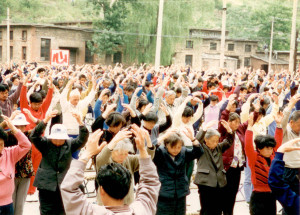 The human being is a product of nature and is also a part of society. Therefore, “Opening” includes both opening to nature and opening to society. In other words, we must be part of nature and society. “Organizing a Qi Field” for teaching and healing demonstrates the characteristics of “Open System” methods. In an organized Qi Field, everyone’s mind and Qi are open and interact with each other. With all movements and intentions in unison, the resonant effect will form a powerful Qi Field. This Qi Field is formed by the participants in the field; in turn, this Qi Field will strengthen everyone’s practice, and will improve the healing results. “Organizing a Qi Field” for teaching and healing will benefit from improved results. One can benefit oneself and others at the same time. Based on these theories, the practices, and the applications, Chilel Qigong has established a complete series of methods in an “Open System.”

In most Qigong practices, in order to use External Qi for healing, one must activate the Dāntián Qi first. The practitioner must cultivate Dāntián Qi until it becomes sufficient before he/she can emit Qi for healing. There is a risk it may harm or deplete his/her own Qi. In the past, people who practiced the Closed System specifically avoided sending Dāntián Qi outward. They feared that it would interfere with their progress. Chilel Qigong’s first step Gong is a collecting and permeating Qi method. Its purpose is to collect the Nature Qi, and to pour and permeate it into the body to achieve good health and healing. If one changes the target and pours the collected Qi into another person, one is emitting the External Qi to facilitate healing; therefore, emitting External Qi for healing is the most elementary practice in Chilel Qigong. Because one uses the Nature Qi instead of his/her own Dāntián Qi, this practice will not deplete his/her own Qi.

When practicing Chilel Qigong, one can accumulate Qi quickly. The effects are very obvious—one’s health improves continually, and the changes are noticeable. In the process of improving to a healthier state, the body will discharge the accumulated matter that is no longer beneficial to life activities. This accumulated matter can be either mental or physical, or both. When that happens, the practitioner may experience some discomfort or pain in the corresponding area. This is called a practice reaction or a Qi reaction.